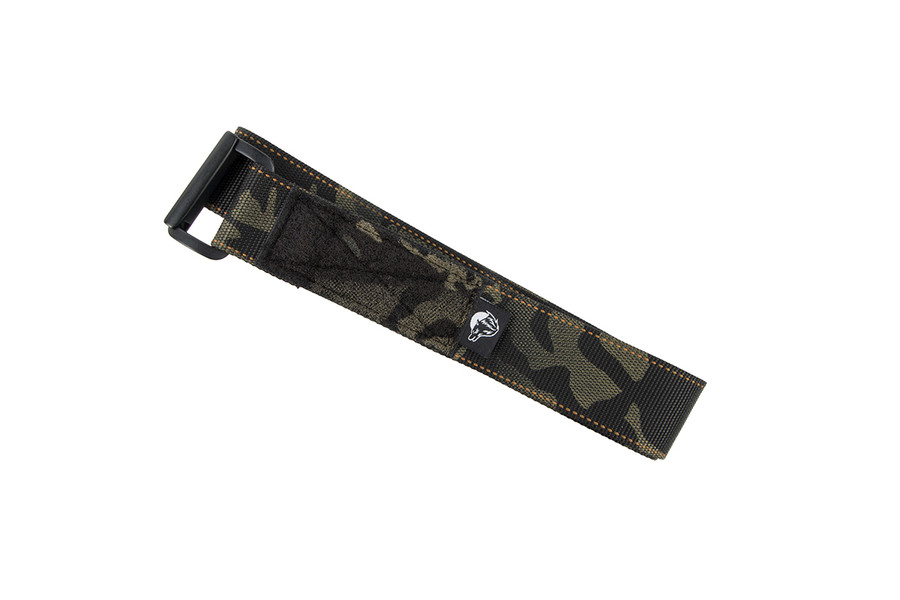 The SENKO is a non-reinforced webbing belt for those who do not wish to wear a rigid belt everyday.

Holds your pants up.

Looks good with a pair of jeans.

NO SERIOUSLY MEASURE YOUR WAIST. MEASURE WHERE YOU PLAN ON WEARING THE BELT.

Purchase the belt that is comparable to your measured waist. If you're close to the edge of the measurement go up a size.

I love this belt, it is so comfortable/light and it holds up my pants well. And this is the second one I owned, I have one for wear at work and second one to wear for EDC.

Great belt for every day. Wear a 36 and conceal a g45 in a standard co and it’s the best set up I’ve ran so far.

This belt is sexy. Fits perfectly. Im a 34 waist and ordered a size medium. Can run an inside the waistband holder with a Glock 48 with no problems.

Honestly one of the better belts I have used in a while. Very comfortable, easy adjusting, and flat out comfortable. And the Velcro panel area is a nice touch to put the Micro US flag on. Great product.

I was skeptical at first. A gun belt that was not ridged.... how would the clips hold on with my various IWB holsters? How would the gun ride in those versions positions? How was the buckle system? All questions I had before spending almost 40 bucks on a belt. I can say, after wearing the belt for the past week, and having carried in the 4 o’clock position with a galco hybrid type holster, the AIWB position with a trex sidecar, and with a trigger guard style holster, the belt holds the weight of my Glock 19 and 1 extra mag extremely well, and with a level of comfort previously unknown to me. The clips hold their retention too, so you don’t pull the whole holster out when drawing. A good belt makes all the difference when carrying a firearm. For CCW, this one is hard to beat. Follow their sizing chart and instructions.

This belt is so great for anyone - low profile so you don&#039;t have a huge belt buckle - adjustment is easy and it looks great! I get so many compliments on this belt - great for ski pants, too! Thank you, Spiritus Systems!

The black multicam pattern makes this belt. It&#039;s quite flexible and somewhat thin, but it holds up a Glock 19.5 well enough when you don&#039;t mind the flex, while repping that black multicam AESTHETIC. Buy the micro USA flag patch too while your wallet is successfully distracted.

Wanted a CCW belt and this fit the bill. I&#039;m more than impressed. The buckle comes tight without much effort, it feels rugged and still wears comfortably.

The best belt — ever *And* my accuracy improved — go figure

Great belt. Easy to adjust and can be routed left or right. I carry AIWB and it’s worked with all my holsters. It lays flatter than traditional buckles so it doesn’t stick out unlike my leather belts, and I can keep the buckle in the front instead of offsetting it. I have leather belts I love, but the Senko has become my sole belt.

I&#039;ve lost count of the different belts I&#039;ve owned over the years. I went through all kinds of rigger style belts and always ended up ditching them; two heavy, rigid and or awkward to use. I went back to a typical pants belts some years ago, all gun belts of course. I lost a lot of weight that made the continued use of my belts difficult without having to punch new holes in all of them to get a proper fit. I&#039;ve eyed the SENKO belt for awhile and wondered if it might just be what I needed. As it turns out it is just what I needed! The SENKO belt is super light, thin and easy to adjust. It&#039;s been super comfortable to wear and it does exactly as described; it holds your pants up and looks cool at the same time. If they made one on M81 Woodland I&#039;d buy that too!

More support than a regular belt but light years more comfortable than a rigid belt. Easy to adjust while wearing/carrying. I wish I never bought a rigid belt after wearing the SENKO. Support and comfort for under half of what a typical uncomfortable rigid belt costs. The micro American flag also looks pretty cool on the velcro portion. I highly recommend this belt over a rigid. It&#039;s simple, effective and doesn&#039;t scream douchey tacticool.

Keeps your pants up with style while you dodge, duck, dip, dive and dodge.

Love this belt. Got the large size, which was too long but super easy to trim down. Sturdy but flexible. I’ve used it to carry a Glock 19 AIWB as well.

Just the fact that it’s this cheap and multicam black is a win. It holds up my pants plus my daily carry (g19 w/rmr06). I can loosen it really quickly when I’m hopping in the car for an extended period. Overall, nice build quality and functions well.

Comfortable, keeps pants up, doesn&#039;t slip and loosen throughout the day. Nice belt.

love the belt so light but yet sturdy and looks great and the velcro part is a great add on to add a pvc patch. about time someone made a EDC belt that is not $$$ expensive but feel and works like an expensive belt

Nice belt. Does what it is supposed to do. It&#039;s light and you barely know you are wearing it but it can still support. I went with the medium and I wear 33 shorts and pants. I don&#039;t like a lot of extra belt flapping around. You can also just size up and trim it to where you want it.

Simple design, feels like a seatbelt. Measured at 38” waist but got a large anyways. Got extra material that rans back around 1/4 way of my waist so i got enough room for your girl to reach in mine with both hands. Keeps tight but easy to loosen when it comes time to serve some D.

This a really NICE belt! I do normally use the ARES systems belts BUT they tend to be TOO rigid and aren&#039;t especially comfortable or concealable in the warmer months. The SENKO belt is well made, comfortable just right for AIWB carry with summer weight clothing and uniforms. It also doesn&#039;t hurt that the MULTICAM BLACK looks awesome as well (IMHO) :)

Belts. We all have them. We don&#039;t all like them. I prefer wearing sweatpants, but I can&#039;t work in sweatpants. It&#039;s unprofessional or something I guess. Anyways, I was getting tired of wearing my heavy and expensive leather gun belt at work. I wanted something that would flex a little better, and be fine in the rain. After a little over a month, I still don&#039;t know how this belt works. I put it on, and then I feel like it disappears. I don&#039;t feel anything, and I don&#039;t see anything. Multicam Black is weird like that. My pants stay held up, which is weird. The roller buckle is awesome because I can tighten or loosen the belt in a quick pinch, even if it&#039;s a single iota one way or the other. It holds up the pouches I use very well, but I wouldn&#039;t advise loading it down. A gat, spare mag, TQ, and maybe a light weight knife would be the extent I would go to. Pick up a mini flag and ASE while you&#039;re at it.

Fantastic belt - does exactly what a belt should do. The built is great and I believe it will live up to its namesake. There is one problem though, well only if you are some beta male. Every single time I wear this belt women tend to toss their panties at me. And granted this could be a problem for an alpha male, Senko belt wearing, stone cold hoodrat - if one finds himself in a location filled with the wrong type of wAmen or something. But this wolf stays in proximity of the right type women. So you have been warned. Oh, and def measure your size.

Looks great, solid stitching, holds up pants. Just do yourself a solid and order the large.

Awesome belt, fit and design is perfect plus it just looks sweet in MC black.

It keeps my pants up, holds up my big ol’ dumb duty gun, and it’s multicam black. You should buy one if you like these things too. ***PS. Can also double as a hasty whip in case you find yourself in a situation that requires a whip

Lightweight, durable and classy looking belt. Highly recommend using soft loop holster mounts (as seen in picture) rather than clips when running this belt due to it being much thinner than traditional tactical belts. Clips may not reliably keep it on the belt. $40 well spent.